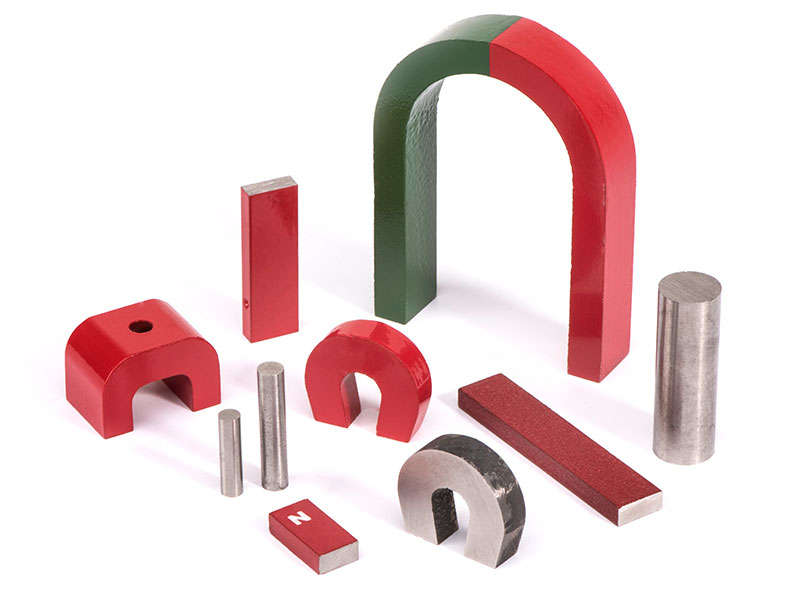 AlNiCo magnets are permanent magnets based on an aluminum-nickel-copper alloy. Additionaly parts of metals such iron, copper or titanium are added to the alloy. The properties of the magnet are determined by the mixing ratio of the metals and the manufacturing process used. A distinction is made in this connection between isotropic and anisotropic magnets, which can have different magnetic values (remanence or coercivity values). The permanent magnetic alloy was introduced and manufactured for the first time by the Japanese materials scientist Tokushichi Mishima in 1931.

The production of AlNiCo magnets

The magnets can be made in different ways. The casting and sintering processes are available for this. In the casting process, the individual components - some of them pre-alloys - are melted and cast in molds (e.g. sand or casting molds). In the sintering process, the metals are initially available, individually and in powder form, then mixed (as required) and finally pressed under high pressure. Then the pressed blanks are sintered at around 1,300 ° C in a vacuum or under a protective atmosphere. The process of diffusion, which is activated thermally, is greatly promoted. The atoms of the pressed metals begin to move faster and to detach from their fixed positions in the grid. The movement of the atoms leads to vacancies in the grid, which in turn can be occupied by other atoms. The separation of the pressed materials disappears because connection zones are created between them. The process therefore leads to the formation of the alloy and to a compression of the compact. The blanks resulting from the casting or sintering process are then subjected to precipitation hardening in order to achieve the desired magnetic properties. An important key word in this context is that of isotropy: First, the metallic phases are homogenized in order to achieve a uniform alpha phase and to avoid unwanted gamma phases. This creates a structure of aluminum-nickel. Very magnetic CoFe needles are present within the resulting AlNi grid, which is non-magnetic. If an electromagnetic field is applied during the phase formation process, the CoFe needles align themselves with this field. The finished magnet can then only be magnetized in this direction - one speaks of an anisotropic magnet. If no electromagnetic field is applied, the needles align in all possible directions. The magnet is then called isotropic. Although this can be magnetized in all directions, it is not as strong as an anisotropic magnet. So only a single step differentiates whether an isotropic or anisotropic magnet is present. Finally, the magnet is subjected to a heat treatment (tempering) in order to optimize the magnetic values and relieve stresses within the structure.

Advantages and disadvantages of AlNiCo magnets and their areas of application

AlNiCo magnets can withstand temperatures of a maximum of 500 to 550 ° C without losing their magnetic properties. They therefore have a higher temperature resistance than SmCo or hard ferrite magnets, whose load capacity is between 250 and 350 ° C. In contrast, neodymium magnets can only be used up to a maximum of 200 ° C. In addition, the AlNiCo magnets are insensitive to corrosion and resistant to most acids, solvents and oils. The high nickel content of the alloy is responsible for this. Ferrite and SmCo magnets are also corrosion-resistant, while the neodymium magnet is highly susceptible to corrosion. However, since the AlNiCo magnets are very hard and brittle, it is not possible to cut (i.e. separate layers of material using a cutting edge) - but they can be ground. Due to its properties, AlNiCo magnets are used wherever material resistance (especially temperature resistance) is important. For example, they are ideal for sensors, magnetic switches, motors, measuring devices, etc. In addition, the magnets are also suitable for home and school use. In school, children can be introduced to the exciting field of magnetism in a playful way. Some of the magnets are even offered and sold only for use in schools. Since AlNiCo magnets have a low coercive field strength, they are very sensitive to demagnetizing fields, while SmCo magnets have a high coercivity. SmCo magnets can therefore better resist demagnetization through magnetic fields. AlNiCo magnets should therefore not be stored with the same polarity. Although the magnets have a relatively low coercivity, they also have a high remanence. So you can assume a strong magnetic field, but this can be weakened again quickly by demagnetizing effects.

In direct comparison with the AlNiCo magnet, properties of other magnet types have already been discussed. In the following section, the advantages and disadvantages of neodymium, ferrite and SmCo magnets are to be specifically considered again in order to differentiate between the four types of magnets discussed. Here, the manufacturing process of the magnets should be roughly included. Ferrite magnets mainly consist of the elements iron, barium and strontium, which are pressed in powder form. This can create isotropic or anisotropic magnets. As with AlNiCo magnets, this depends on whether the process takes place with or without a magnetic field. Afterwards, the compacts are sintered in an oxidizing atmosphere. The inexpensive ferrite magnets are easy to magnetize and resistant to corrosion and chemicals. However, they are very sensitive to shocks, which can lead to chipping. In addition, the magnetic properties of ferrite magnets are low. Neodymium magnets consist essentially of neodymium, iron and boron. Their substance powder is in turn compressed within a magnetic field, but the compact is subsequently sintered in a vacuum. The magnets are characterized by high coercivity and remanence, at the same time offer a strong magnetic field with a small volume. Therefore, they are suitable for the construction of the smallest electronic devices. However, the magnets are susceptible to corrosion, and they only withstand temperatures up to a maximum of 200 ° C. Finally, the SmCo magnets (samarium-cobalt magnets): The magnets are very expensive because the samarium deposits are relatively scarce and their dismantling is very complex. In addition to samarium and cobalt, the magnets are made of iron and copper. The ground material powder is pressed and sintered again in a magnetic field. The SmCo magnets have a high remanence, coercivity, energy density and corrosion resistance, but are very sensitive and tend to splinter with sharp edges.

In what form are AlNiCo magnets available?

The optimal ratio of length to diameter is given as 4 to 1 for AlNiCo magnets. It can be in a wide variety of forms: as a disc, as a ring, as a block, as a cuboid, as a cone, as a sphere, as a pyramid, or traditionally as a horseshoe or rod.

An AlNiCo magnet is a permanent magnet that can be created using the casting or sintering process. The blanks produced are subjected to precipitation hardening in order to achieve the homogenization of the phases. Magnetic CoFe needles are present within the AlNi grid. If an electromagnetic field is applied during phase formation, the CoFe needles align themselves with it - one speaks of an anisotropic magnet that can only be magnetized in one direction. If the phase formation process takes place without an electromagnetic field, the CoFe needles align themselves as desired, the magnet can be magnetized in all directions, but is weaker. One speaks of an isotropic magnet. The AlNiCo magnet has a very high temperature and corrosion resistance, but is very hard and brittle, which makes processing difficult. In addition, the magnet has a weak coercive force, which makes it sensitive to opposing magnetic fields. In contrast, however, it has a high remanence value.